Join action is used to unify (bring back together) 2 or more branches in one branch after a decisional action. After Join - only one action can be connected as a successor.

A branch coming out from a decisional can be connected to any action, including to another Join action on canvas, no matter if the Join action is used before or after the branch.

When branches are unified in a Join, we only need one of them to be executed in order to start executing the “Join” action. The process then continues.

How to configure the Join action?

Go to Process Designers section and open a new or an existing process. Actions configuration can be performed once they are dragged and dropped on canvas. 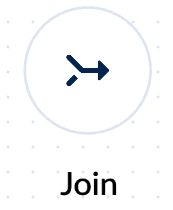 Join action is used to unify (bring back together) 2 or more branches in one branch after a decisional action.

A Join action can have multiple connectors that come from multiple predecessor actions, but only 1 connector that goes to a successor action.

Step 1: Drag the Join action from Toolbar and drop it on canvas.

Step 2: Connect previous actions to Join action in order to unify branches coming out from a Decisional action.